Americans with Disabilities Act of 1990

Taken from Wikipedia, The Free Encyclopedia

The Americans with Disabilities Act of 1990 (42 U.S.C. § 12101) is a civil rights law that prohibits discrimination based on disability. It affords similar protections against discrimination to Americans with disabilities as the Civil Rights Act of 1964,[1] which made discrimination based on race, religion, sex, national origin, and other characteristics illegal. In addition, unlike the Civil Rights Act, the ADA also requires covered employers to provide reasonable accommodations to employees with disabilities, and imposes accessibility requirements on public accommodations.[2]

In 1986, the National Council on Disability had recommended enactment of an Americans with Disabilities Act (ADA) and drafted the first version of the bill which was introduced in the House and Senate in 1988. The final version of the bill was signed into law on July 26, 1990, by President George H. W. Bush. It was later amended in 2008 and signed by President George W. Bush with changes effective as of January 1, 2009.[3] 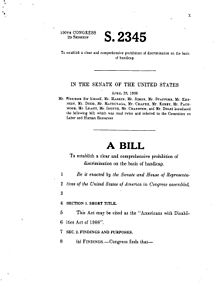 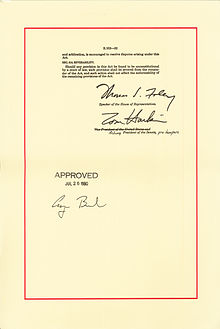 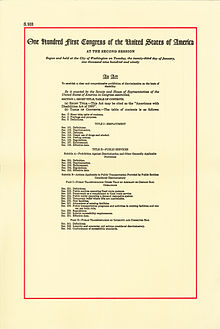 Americans with Disabilities Act of 1990

ADA disabilities include both mental and physical medical conditions. A condition does not need to be severe or permanent to be a disability.[6] Equal Employment Opportunity Commission regulations provide a list of conditions that should easily be concluded to be disabilities: deafness, blindness, an intellectual disability (formerly termed mental retardation), partially or completely missing limbs or mobility impairments requiring the use of a wheelchair, autism, cancer, cerebral palsy, diabetes, epilepsy, Human Immunodeficiency Virus (HIV) infection, multiple sclerosis, muscular dystrophy, major depressive disorder, bipolar disorder, post-traumatic stress disorder, obsessive compulsive disorder, and schizophrenia.[7] Other mental or physical health conditions also may be disabilities, depending on what the individual’s symptoms would be in the absence of “mitigating measures” (medication, therapy, assistive devices, or other means of restoring function), during an “active episode” of the condition (if the condition is episodic).[7]

Certain specific conditions that are widely considered anti-social, or tend to result in illegal activity, such as kleptomania, pedophilia, exhibitionism, voyeurism, etc. are excluded under the definition of “disability” in order to prevent abuse of the statute’s purpose.[8][9]Additionally, other specific conditions, such as gender identity disorders, are also excluded under the definition of “disability”.[9][10]

Speech cards used by President George H. W. Bush at the signing ceremony of the Americans with Disabilities Act (ADA) on July 26, 1990[11]

The ADA states that a “covered entity” shall not discriminate against “a qualified individual with a disability”.[12] This applies to job application procedures, hiring, advancement and discharge of employees, job training, and other terms, conditions, and privileges of employment. “Covered entities” include employers with 15 or more employees, as well as employment agencies, labor organizations, and joint labor-management committees.[13] There are strict limitations on when a covered entity can ask job applicants or employees disability-related questions or require them to undergo medical examination, and all medical information must be kept confidential.[14][15]

Prohibited discrimination may include, among other things, firing or refusing to hire someone based on a real or perceived disability, segregation, and harassment based on a disability. Covered entities are also required to provide reasonable accommodations to job applicants and employees with disabilities.[16] A reasonable accommodation is a change in the way things are typically done that the person needs because of a disability, and can include, among other things, special equipment that allows the person to perform the job, scheduling changes, and changes to the way work assignments are chosen or communicated.[17] An employer is not required to provide an accommodation that would involve undue hardship (significant difficulty or expense), and the individual who receives the accommodation must still perform the essential functions of the job and meet the normal performance requirements. An employee or applicant who currently engages in the illegal use of drugs is not considered qualified when a covered entity takes adverse action based on such use.[18]

There are many ways to discriminate against people based on disabilities, including psychological ones. Anyone known to have a history of mental disorders can be considered disabled. Employers with more than 15 employees must take care to treat all employees fairly and with any accommodations needed. Even when an employee is doing a job exceptionally well, she or he is not necessarily no longer disabled; employers must continue to follow all policies for the disabled.

Part of Title I was found unconstitutional by the United States Supreme Court as it pertains to states in the case of Board of Trustees of the University of Alabama v. Garrett as violating the sovereign immunity rights of the several states as specified by the Eleventh Amendment to the United States Constitution. The Court determined that state employees cannot sue their employer for violating ADA rules. State employees can, however, file complaints at the Department of Justice or the Equal Employment Opportunity Commission, who can sue on their behalf.[19] 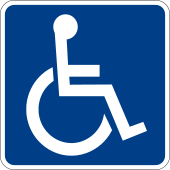 Title II prohibits disability discrimination by all public entities at the local level, e.g., school district, municipal, city, or county, and at state level. Public entities must comply with Title II regulations by the U.S. Department of Justice. These regulations cover access to all programs and services offered by the entity. Access includes physical access described in the ADA Standards for Accessible Design and programmatic access that might be obstructed by discriminatory policies or procedures of the entity.

Title II applies to public transportation provided by public entities through regulations by the U.S. Department of Transportation. It includes the National Railroad Passenger Corporation (Amtrak), along with all other commuter authorities. This section requires the provision of paratransit services by public entities that provide fixed route services. ADA also sets minimum requirements for space layout in order to facilitate wheelchair securement on public transport.[20]

Title II also applies to all state and local public housing, housing assistance, and housing referrals. The Office of Fair Housing and Equal Opportunity is charged with enforcing this provision. 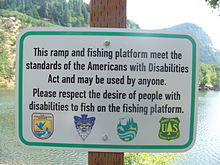 The ADA sets standards for construction of accessible public facilities. Shown is a sign indicating an accessible fishing platform at Drano Lake, Washington.

Under Title III of the ADA, all new construction (construction, modification or alterations) after the effective date of the ADA (approximately July 1992) must be fully compliant with the Americans With Disabilities Act Accessibility Guidelines (ADAAG)[11] found in the Code of Federal Regulations at 28 C.F.R., Part 36, Appendix A.

Title III also has application to existing facilities. One of the definitions of “discrimination” under Title III of the ADA is a “failure to remove” architectural barriers in existing facilities. See 42 U.S.C. § 12182(b)(2)(A)(iv). This means that even facilities that have not been modified or altered in any way after the ADA was passed still have obligations. The standard is whether “removing barriers” (typically defined as bringing a condition into compliance with the ADAAG) is “readily achievable”, defined as “…easily accomplished without much difficulty or expense”.

There are exceptions to this title; many private clubs and religious organizations may not be bound by Title III. With regard to historic properties (those properties that are listed or that are eligible for listing in the National Register of Historic Places, or properties designated as historic under state or local law), those facilities must still comply with the provisions of Title III of the ADA to the “maximum extent feasible” but if following the usual standards would “threaten to destroy the historic significance of a feature of the building” then alternative standards may be used.

Under 2010 revisions of Department of Justice regulations, newly constructed or altered swimming pools, wading pools, and spas must have an accessible means of entrance and exit to pools for disabled people. However, the requirement is conditioned on whether providing access through a fixed lift is “readily achievable”. Other requirements exist, based on pool size, include providing a certain number of accessible means of entry and exit, which are outlined in Section 242 of the standards. However, businesses are free to consider the differences in application of the rules depending on whether the pool is new or altered, or whether the swimming pool was in existence before the effective date of the new rule. Full compliance may not be required for existing facilities; Section 242 and 1009 of the 2010 Standards outline such exceptions.[21]

The ADA provides explicit coverage for service animals.[22] Guidelines have been developed not only to protect persons with disabilities, but also to indemnify businesses from damages related to granting access to service animals on their premises. Businesses are allowed to ask if the animal is a service animal and ask what tasks it is trained to perform, but they are not allowed to ask the service animal to perform the task nor ask for a special ID of the animal. They can not ask what the person’s disabilities are. A person with a disability can not be removed from the premises unless either of two things happen: the animal is out of control and its owner can not get it under control (e.g. a dog barking uncontrollably in a restaurant), or the animal is a direct threat to people’s health and safety. Allergies and fear of animal would not be considered a threat to people’s health and safety so it would not be a valid reason to deny access to people with service animals. Businesses that prepare or serve food must allow service animals and their owners on the premises even if state or local health laws otherwise prohibit animals on the premise. In this case, businesses that prepare or serve food are not required to provide care or food for service animals nor do they have to provide a designated area for the service animal to use the bathroom. Lastly, people that require service dogs can not be charged an extra fee for their service dog or be treated unfairly. For example, being isolated from people at a restaurant. People with disabilities can not be treated less than other customers. However, if a business normally charges for damages caused by the person to property, the customer with a disability will be charged for his/her service animal’s damages to the property.

Title IV of the ADA amended the landmark Communications Act of 1934 primarily by adding section 47 U.S.C. § 225. This section requires that all telecommunications companies in the U.S. take steps to ensure functionally equivalent services for consumers with disabilities, notably those who are deaf or hard of hearing and those with speech impairments. When Title IV took effect in the early 1990s, it led to the installation of public teletypewriter (TTY) machines and other TDD (telecommunications devices for the deaf). Title IV also led to the creation, in all 50 states and the District of Columbia, of what were then called dual-party relay services and now are known as Telecommunications Relay Services (TRS), such as STS relay. Today, many TRS-mediated calls are made over the Internet by consumers who use broadband connections. Some are Video Relay Service (VRS) calls, while others are text calls. In either variation, communication assistants translate between the signed or typed words of a consumer and the spoken words of others. In 2006, according to the Federal Communications Commission (FCC), VRS calls averaged two million minutes a month.

The job of a writer is to tap into his innermost psyche and express himself unabashedly with brutal honesty, without regard to what others may think of what he exposed. He must push the limits of what is acceptable.

Any writer worth his salt never apologizes for writing what’s in his heart, no matter if it means sacrificing those who are closest to him. This is all part of being true to yourself and your craft.